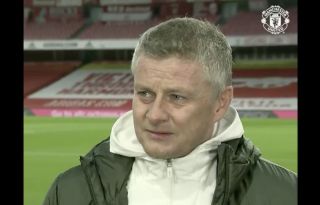 The Red Devils come into Saturday evening’s match off the back of a recent devastating 2-1 defeat against Sheffield United.

Looking to bounce back as Arsenal play host to Ole Gunnar Solskjaer’s title contenders, the Norwegian will be hoping to see a much improved display compared to one his side endured earlier in the week.

Speaking ahead of Saturday’s match against Mikel Arteta’s Gunners, Solskjaer has hinted that putting balls into the box for striker Edinson Cavani to get on the end could be key.

“Get men forward,” Solskjaer told MUTV. “Of course with Edinson [Cavani] in there, we want to put crosses in which is something we worked on for tonight.”

Time to grab a pre-match word with the boss 🎤

Read more: Reaction to Anthony Martial being dropped against Arsenal