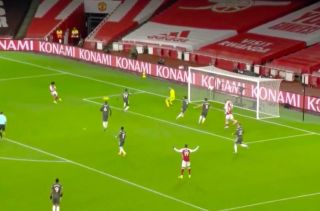 Manchester United may have fallen behind early in the second-half against Arsenal but for the brilliance of right-back Aaron Wan-Bissaka.

Ole Gunnar Solskjaer’s side were put under huge pressure after the break and were thankful for Wan-Bissaka’s recovery to block Willian who was free at the back post.

But the 23-year-old capitalised on Willian’s lack of authority in a glorious position to scurry back into position and block the shot out for a corner just as it appeared David De Gea was beaten.

Mikel Arteta’s Arsenal have had the better of the early exchanges in the second-half and United’s 17-game unbeaten run away in the Premier League is in jeopardy at the Emirates Stadium.