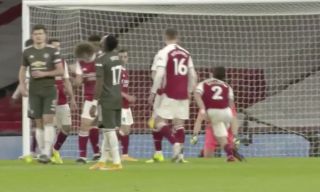 Manchester United and Arsenal are currently embroiled in a tense encounter at the Emirates in Saturday’s Premier League match-up.

Heading into the game both sides would have been desperate to claim all three-points, for different reasons; United, desperate to bounce back following a recent 2-1 defeat to Sheffield United and Arsenal, looking to extend their decent run of form.

The match’s first-half has failed to produce any goals, despite United having the best of the chances.

The first-half’s best chance arguably fell to Bruno Fernandes who lined-up a tasty looking dead-ball kick just outside of the Gunners’ area.

In what would have been a decent effort, defender David Luiz managed to get his head to it to deflect it wide.

The Brazilian’s defensive heroics were echoed by his hilarious over-the-top celebration once he saw Fernandes’ strike go just over the bar.