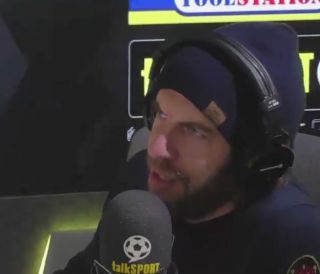 I don’t care how confident I get, I would never risk wearing a rival’s shirt.

No way. I’d rather just walk away from the potential bet and feel like the bigger man.

But with talkSPORT here, it’s about numbers and ensure they keep listeners intrigued.

Say what you like about the station (most have faults), but I enjoy Goldstein because he’s a great personality on radio. It’s just a bonus that he loves United.

Along with Darren Bent, former Premier League striker and Arsenal supporter, a bet has been place with Goldstein ahead of United’s trip to the Emirates.

If United win, Bent will wear a full United kit, and if Arsenal win Goldstein needs to wear a full Arsenal kit.

There’s no way I would risk that.