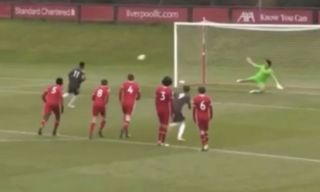 Amad Diallo marked his debut for Manchester United Under-23s with a brace over rivals Liverpool.

Joe Hugill scored a whopping four goals against the Scousers too, so there’s a lot to be happy with this Saturday afternoon.

Now it’s a matter of topping it off with a win on the road against Arsenal in the Premier League.

But it was fantastic to see United’s new wonderkid make his debut for the U23s and net a brace.

The first goal saw the Ivorian winger pounce at the right moment before finishing calmly past the Liverpool goalkeeper.

His second will help break a smile on your face.

With confidence in abundance, the 18-year-old converted a penalty kick and did so by dinking a ‘Peneka’ penalty into the back of the net.

We love to see it!