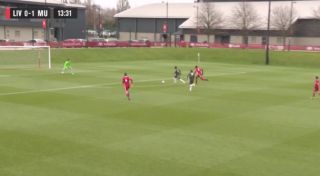 Manchester United U23s find themselves in the lead after being on the back foot away to Liverpool.

What a way to announce yourself. Amad Diallo scoring just thirteen minutes into his Manchester United Under-23s debut against Liverpool.

The home side had been on top in the opening stages of the match, but Diallo was waiting patiently to pounce at the right moment to retrieve possession before slotting the ball calmly past Liverpool’s goalkeeper.

Any early feelings of panic from the young side should be squashed now they find themselves in a strong position to win the match over United’s old rivals.

Watch Diallo’s first goal for the club below:

Diallo will have a ton of confidence after that goal. Hopefully a spring in his step to score another against the Scousers.

Ultimately it would be great if the lads won the game.