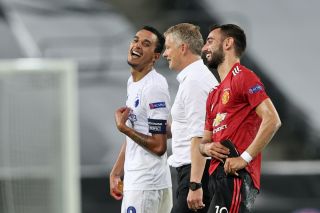 Ole Gunnar Solskjaer heaped praise on Bruno Fernandes after coming to Manchester United and having such an incredible impact on the team.

Today marks the first anniversary of the Portuguese playmaker’s arrival at Old Trafford, where he has settled like a fish in water after joining from Sporting in his homeland.

He has scored 28 goals in all competitions and providing the assist for 17 more, which is enough to tell you he has brought goals to the team. That’s why we’re winning football matches.

It’s crazy to think in hindsight that Ole Gunnar Solskjaer initially wanted Aston Villa’s Jack Grealish, but settled for Fernandes, as per ESPN. I wouldn’t necessarily call that bad judgement but I’m delighted Fernandes is ours and not playing somewhere else like Tottenham.

Solskjaer could not have asked for any more from the competitive midfielder.

“He’s such a humble human being, working hard and I think everyone has seen what he’s done on the pitch.

“Very pleased with his first year and long may it continue. The higher up in the league, the more pressure there will be on us and on him.

“Now the limelight is on him but I’m sure he’ll handle that pressure fine.

“He’s got his opinion, he’s a winner. He’s not just going to let a game pass away and talk about it after. He wants to affect it there and then.

“He’s so passionate about winning and he knows his football, he knows his stuff. He watches every single game there is on telly, especially the big games.

“And if you ask him ‘did you watch that last night?’ he’s always seen the game, so he’s going to make the most of his career, that’s for sure.”

Read more: The battle of Old Trafford with Arsenal