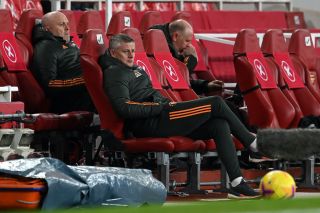 Manchester United need to do more to get going at the Emirates. It’s still goalless and Arsenal are starting to show decent glimpses of play.

Ole Gunnar Solskjaer will be trying to rally his troops. There’s been a lack of urgency about both teams, but the Norwegian needs to wake his players up or they risk going back to Manchester feeling disappointed tonight.

The journalists are near the dugout at the Emirates doing all they can to soak up the atmosphere. A number of those at the game are tweeting throughout, including GOAL’s Arsenal correspondent Charles Watts, who has quoted Solskjaer having a go at Arsenal midfielder Gabriel Martinelli.

It was also heard by The Independent’s Miguel Delaney, but he didn’t specify which Arsenal player Solskjaer was referring to.

Solskjaer telling Rashford that Martinelli "cannot defend" and to take him on "whenever you like".

Solskjaer has just come to edge of technical area, pointed at edge of Arsenal's area and gone "Marcus, he cannot defend. He CANNOT defend. Take him on if you want."

Let’s hope Marcus Rashford takes those orders from Solskjaer on the chin and goes on to make a difference in the game.

Martinelli has had to work hard defensively to support Cedric, so it will be interesting to see if he has the discipline to do it throughout the game. Mikel Arteta’s Gunners are not renowned for keeping discipline which ultimately could make for an interest game in the second-half.