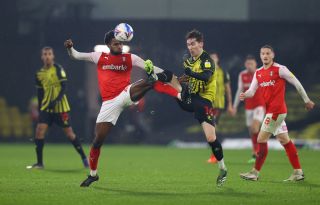 James Garner’s Wartford contract has been terminated by mutual consent.

It sounds like the player and Manchester United believe he would be better placed elsewhere on loan than Watford.

The midfielder will return to Manchester United before joining Nottingham Forest for the remainder of the season, according to Manchester Evening News reporter Rich Fay (@RichFay).

Fay adds that QPR were also interested in Garner, who has played just 40 minutes in the past month under new manager Xisco Munoz.

United have terminated James Garner's loan deal at Watford, with the youngster having played just 40 minutes in the past month under new manager Xisco.

Garner is now set to join Nottingham Forest for the remainder of the season, QPR were also interested #mufc

The Watford Observer claims Garner looked ‘particularly frustrated’ during a game against Stoke City when he had been told to prepare to come on as a substitute, only for the coach to change his mind at the last minute and leave the player unused on the bench.

I guess this is part of football but it doesn’t sound like Garner had the right people around him at Watford. The manager didn’t see him as part of his plans, despite yesterday telling reporters the midfielder would get a chance to impress this season.

Yeah, but not at Watford…

This is what Munoz said yesterday (via Nottingham Post): “I’m very happy with Hames, he’s a big professional. He’s working every day excellently and all I can say is: ‘Sorry, man, wait for your opportunity and when you have your opportunity, you have to show everyone that no one can take you out of the first 11.”

The coaches at Carrington all think highly of Garner, so hopefully it’s a better second half of the season for the kid. He certainly needs to kick on.