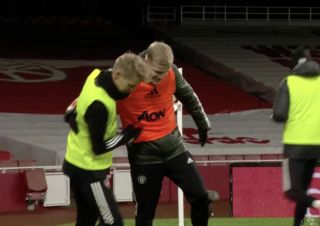 It’s still goalless at the Emirates.

Arsenal have been the better side since the beginning of the second-half but they’ve been unable to open the scoring despite several attempts to make something happen in the final third.

Both managers have been asking players to warm-up at the side of the pitch and two players from either side greeted one another in a rather friendly manner.

Usually, in games like this against a rival, I’d argue there’s no time for this sort of malarky because the ultimate aim must be to win the game.

Though Donny van de Beek can’t make of a difference from the bench, so he gets away with it…

Martin Odegaard has yet to make his debut for Arsenal but he will be hoping to have a big impact on Arsenal this season, after joining the club on loan until the summer.

Check out the photos of Van de Beek and Odegaard below:

Not a lot of social distancing going on in those pictures!