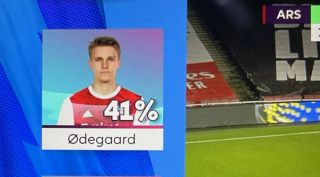 Manchester United and Arsenal played out a drab 0-0 stalemate during the side’s Premier League match on Saturday afternoon.

Despite both sides fielding their best 11 on paper, neither side could force the breakthrough and ultimately ended up sharing the points.

Saturday afternoon’s match was far from a spectacle which saw the usually creative Bruno Fernandes and co. fail to provide any real moments of excitement.

Arguably one of the match’s highlights came from Norwegian broadcaster TV2 who ran a MOTM poll shortly before the final-whistle.

Hilariously, viewers voted Arsenal’s new-signing and substitute Martin Odegaard as the game’s Man of the Match even before the 22-year-old had entered the field of play.

The fans’ hilarious decision just goes to show how much of a snooze-fest another over-hyped Sky Sports match was.