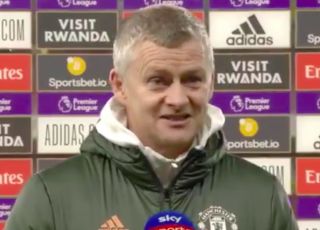 Ole Gunnar Solskjaer was left frustrated from two ‘massive’ missed opportunities as Manchester United were held to a goalless draw by Arsenal.

United broke their club record by making it 18 league games unbeaten away from home but failed to provide a decisive moment at the Emirates.

It ends a frustrating week for Solskjaer’s men who were defeated by bottom placed Sheffield United on Wednesday.

Some accused United of lacking urgency and belief against the Gunners, who came closest to scoring a winner through Alexandre Lacazette’s free-kick which struck the crossbar.

United could have netted a winner themselves late on when Edinson Cavani hooked a volley agonisingly wide two minutes from time.

Despite the draw, Solskjaer described United’s overall performance as ‘decent’ and hailed the defensive efforts of the back four.

🗣"We had the bigger chances to win the game"

Ole Gunnar Solskjær was positive about the 0-0 draw with Arsenal and feels they had chances to win the game pic.twitter.com/4Qm4J1N7GV