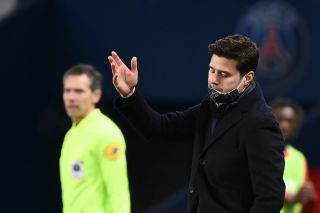 It’s no secret that Manchester United have looked at Mauricio Pochettino in the past, but Ole Gunnar Solskjaer deserves credit with turning things around with such pressure constantly placed on his shoulders.

Pochettino says he didn’t speak openly in the media about looking for a new job because he felt that he was being linked with so many positions at the same time.

He had been without a job since he was sacked by Tottenham in November 2019 when he was appointed as the new manager of Paris Saint-Germain at the start of the year.

With every point dropped, the media speculated over Pochettino getting Solskjaer’s job but the United manager didn’t allow that to derail his chances of being a success at Old Trafford.

The Norwegian has made United a better side and this season we are on course to compete for the Premier League title — as well as being in the FA Cup and Europa League.

Meanwhile, Pochettino had been linked with other jobs around Europe. He has made such an impression on the Premier League in recent years, from helping Spurs to challenge to reaching the Champions League final in 2019.

United have always been loyal to Solskjaer and have trusted him through some difficult times. Ultimately, I think that will come to benefit the team. This season we’ve seen Luke Shaw become the left-back we always wanted him to be, Scott McTominay and Fred and consistent regulars in the side and Bruno Fernandes has been our best buy since Robin van Persie in 2012.

Pochettino has addressed the speculation that surrounded him and revealed he made a conscious decision not to openly discuss his future in management, despite making an appearance on Monday Night Football in November.

“I didn’t want anyone to think that I speak because I do not have a job and maybe, I’m offering myself,” he told AS (via Sport Witness). “The good thing about that situation was that every morning you woke up in a different club. One day they placed you at Madrid, another at United… At PSG…

“That’s why I didn’t need to have that media visibility. I had it without wanting it. I was a bit lucky in that regard. They linked my name to different clubs and the exposure came spontaneously.

“I was travelling virtually from one club to another. Surely when you talk, it has some basis, but for it to be done for real, as with PSG, ties have to be closed.”

So, did Pochettino completely forget about his appearance on MNF?