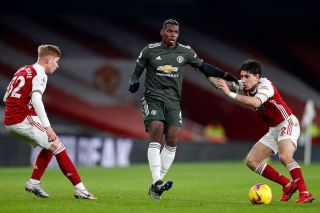 Saved well from Smith-Rowe and grateful for Wan-Bissaka’s excellent recovery. 7

Too many touches in possession as United were too slow in attacking transition. Deserves credit for commitment in overcoming Arsenal’s second-half deluge. 7

Struggled with stomach problem for a while before belated substitution as United changed their approach. 6

Close to scoring with fine half-volley in first-half and his energy improved United’s midfield. 6

Fired up and fortunate not to be punished for challenge on Xhaka. He never found space in between Arsenal’s midfield and defence and was second game in a week he hasn’t had his usual totemic impact. 4

Started on the left but more comfortable when he joined Fred in midfield axis after McTominay’s substitution. Influence didn’t grow as expected in second-half as Arsenal had edge in the middle of the park. 6

Wasteful and could have pulled the trigger in first-half when free at the back post. Rarely brought off as Solskjaer tried to get a spark out of Greenwood. 4

Got into promising positions with great movement and worked tirelessly throughout. Late volley went agonisingly wide. 6

Lacked the movement of Cavani despite United’s initial spark when he was introduced. Still out-of-sorts and he couldn’t provide a decisive moment in attack. 4