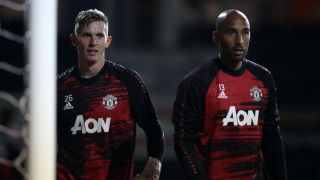 Manchester United are blessed in the goalkeeping department, but with such a wealth of talent often comes its own problems. However, according to the club’s third-choice shot-stopper Lee Grant, Ole Gunnar Solskjaer is doing a brilliant job of keeping all his footballing assets happy.

Despite featuring during the Red Devils’ pre-season tour before the 2018-19 season got underway, the English keeper has always accepted his role of emergency back-up.

The Red Devils are blessed when it comes to keeping talents having both Spanish international David De Gea and number-two Dean Henderson available for selection.

Despite the wealth of defensive talent among United’s ranks, there have been suggestions that Henderson may be looking to move on in order to gain some valuable first-team action.

However, offering a brilliant insight into the seemingly harmonious environment behind-the-scenes at United, Grant, who spoke to the Daily Mirror said: “I think the manager’s handled that situation wonderfully well.

“Because, actually, at the start of the season there were big question marks on how that was going to work and the dynamics within the group.

In line with Grant’s recent comments, it goes without saying, what Solskjaer may lack in managerial experience he more than makes up for with his brilliant man-management skills.