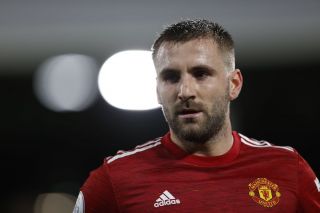 Despite Manchester United playing out a boring 0-0 draw against Arsenal on Saturday afternoon, one player who is continuing to impress in a United shirt is full-back Luke Shaw.

After spending nearly six-years with the Red Devils, Shaw hasn’t always been able to string a decent run of form together.

Often slated by pundits and fans alike, mostly for his failures when reaching opponents final-third, Shaw’s United career has not been without its adversity.

In addition to the criticism he has often suffered, a gut-wrenching leg-break in 2015 only added to the Englishman’s plight.

Nevertheless, in a remarkable bid to reinvent his game, Shaw has enjoyed a brilliant first-half to the 2020-21 campaign and has grown to become arguably one of his side’s most important players.

Back in action for the Red Devils earlier on Saturday during a 0-0 snooze fest against Mikel Arteta’s Arsenal, Shaw was once again one United’s best players.

In light of the 25-year-old’s continued impressive form, a brilliant stat has emerged which shows just how far his attacking game has come.

Luke Shaw is averaging 2.0 key passes p90 in the Premier League this season, his best ever tally in league competition.

A threat from set-pieces and in open play. 🎯 pic.twitter.com/hwCqx5ZDk1