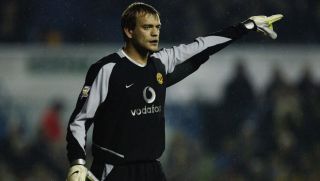 Why stop if you can keep going?

Roy Carroll now strikes me as someone who loves football so much he can’t get enough of it.

Sure, I bet some of you reading this will be thinking at 43-years-old he should call it a day — but it’s not like he’s playing at a very high level.

Carroll is remembered by many as being that goalkeeper who allowed Tottenham’s Pedro Mendes to beat him from half-way line but, incredibly, the officials deemed that the ball had not crossed the line, even though it was crystal clear through the TV cameras.

They didn’t have VAR back in those days and Carroll was all the happier for it!

Pictures courtesy of Prem Plus LIVE

Carroll would have competed for a place in the United team with Tim Howard, and the former Northern Ireland international won a Premier League winners medal during his time at the club, as well as the FA Cup in 2004.

We’ve moved on 16 years since that episode and Carroll is still playing football. After an 18-month break he has signed for Irish Premiership side, Dungannon Swifts, the 13th club of his professional career.

If you haven’t already heard👀… Roy Carroll is a #Swift 🕺🏽

“I’m coming back to play in the Irish League and no matter what team you sign for, it’s just great to get back out and play football,” he told the Swifts’ official website.

“A real pull for me to Dungannon is that the club has two young keepers and I feel it would be good for me to come in and help them as much as I can.

“I know Connor [Byrne] very well as I’ve been working up at Dungannon Youth, in the NFL Academy, with him. Hopefully I can help develop him and Sam [Johnston] for the future of the club.”

We wish Carroll the very best and think it’s brilliant that he still has the same hunger for the game at 43. I think there will be plenty tipping him to go further once he retires!