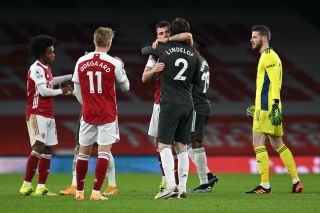 Manchester United dropped points for the third time in four Premier League games after a goalless stalemate against Arsenal.

Edinson Cavani went close in the closing stages of the match and Fred was also denied by Bernd Leno.

But Arsenal had the better chances throughout — but neither side made a big enough claim to win the game outright.

The Gunners were without Pierre-Emerick Aubameyang, Kieran Tierney and Bukayo Saka — but Mikel Arteta was able to give Martin Odegaard his debut from the bench.

United’s Scott McTominay had to come off in the first-half with persistent stomach pains.

The Red Devils remain unbeaten in the league away from home while Arsenal extended their unbeaten run to 7 league matches.

This is how several of the biggest journalists covering the English game reacted at full-time.

Adam Crafton of The Athletic downplays United’s title changes after dropping points away to Arsenal.

#mufc no goal from open play in six PL games this season v Arsenal (twice), Chelsea, Tottenham, Liverpool and City. A side just about good enough to be in a title conversation but not in real title contention.

New record as United go 18 successive away games unbeaten in Premier League but familiar feeling to that at Anfield.

United's fourth goalless draw with a 'big six' side in the league this season. One goal in 540 minutes across those games this season. This was definitely two points dropped. They let Arsenal off the hook. #mufc

Rich Fay from the Manchester Evening News clutching for straws.