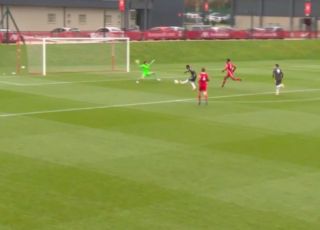 Amad Diallo has sent a message to Manchester United supporters after making a dream debut for Neil Wood’s U23 side against Liverpool.

United ran out 6-3 winners in a dramatic game at Kirkby Academy, where Diallo impressed by scoring two goals.

Diallo’s first came just 14 minutes into his first appearance as he pressurised a Liverpool defender before sweeping home with his left-foot.

The Ivorian winger then showed great confidence to hit a ‘panenka’ penalty to put United 6-2 ahead.

Diallo, 19, signed for United from Atalanta in October but only began training with the first-team squad this month after his visa was finalised.

On today’s evidence, Diallo could be in line for a first-team debut sooner than expected under Ole Gunnar Solskjaer.

The teenager could be involved in Solskjaer’s squad that take on Southampton in the Premier League on Tuesday.

After scoring the brace that helped United leapfrog their bitterest rivals in Premier League 2, Diallo cheekily tweeted ‘Did you enjoy the show’.

Joe Hugill was another player who hugely impressed in the academy fixture; the 17-year-old striker netted all of the other four goals in United’s win.

Did you enjoy the show?🤩 pic.twitter.com/F71PhI1hUL