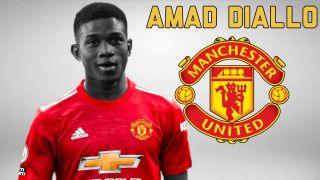 Manchester United fans will today get their first glimpse of Amad Diallo in a United shirt.

Neil Wood’s U23 side travel to Merseyside this afternoon and take on Liverpool with a big name in the starting line-up.

Manchester United youngster Amad Diallo will make his debut for the club in the U23 team against Liverpool.

Diallo’s transfer from Atalanta was announced in the summer and officially completed at the beginning of January. The winger has been training with the first-team but gets an opportunity to show what he can do today with the youths.

Solskjaer confirmed yesterday that Diallo would make his debut today, saying (via Manchester Evening News): “Amad will play in the game against Liverpool in the Under-23s. He’s been training really well and settling in. He’s ready to get some game-time and match exposure. I’m looking forward to seeing him. [Liverpool?] There you go. Welcome to English football!”

United are without Facundo Pellistri who is on the verge of joining Deportivo Alaves.

We are looking forward to seeing Diallo in action. It’s been a very long time since United had a real goalscoring threat on the right wing.

That’s why reports in Portugal claim Solskjaer is trying to fix that but maybe Diallo can prove himself before the season ends?