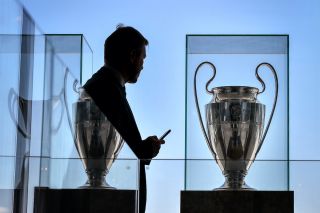 The powers of UEFA are seriously considering a remodel of the Champions League.

According to AS, talks are ongoing to launch a new ‘Super Champions League’ tournament in 2024, but it could even be brought forward to as soon as next season if the clubs involved come to an agreement.

These are UEFA’s attempts to fight off the threat of a breakaway European Super League.

Those believed to be involved in talks are UEFA president Aleksander Ceferin, Andrea Agnelli, Pedro Lopez Jiminez, and representatives from Manchester United, Fenerbahce and PSG.

UEFA aims to bring in 'Super Champions League' in 2024https://t.co/GfLBORxUGq

This could see a reduction in numbers of clubs involved in the competition to 18, or potentially even 16.

On top of that, domestic cup competitions would have a maximum of four or five rounds, and there’s long been talk about abolishing the EFL Cup.

Manchester United have had much luck in the League Cup in recent years — and it’s never a competition at the top of our wish list.

The Red Devils were knocked out of the Champions League already this season — not getting out of their group after a convincing start to the campaign — and have drawn Real Sociedad in the Europa League.

With United involved in these talks with UEFA over remodelling the Champions League, it’s important that the club can act like a fly on a wall to get a better idea of the plans likely to be put in place.

It remains to be seen what this means for supporters but with no fans at games at the moment, you can only hope that the governing bodies are putting our best interests first.