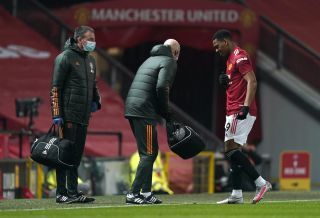 Wednesday night’s defeat at home to relegation favourites Sheffield United in the Premier League provided another lackadaisical performance from forward Anthony Martial. He was pretty much non-existent throughout the full match against the Blades’ and has been heavily criticised on social media for his lack of effort in closing down in the build-up to Oliver Burke’s winning goal at Old Trafford.

The French international has struggled for form and consistency in the first half of the season scoring a measly 5 goals in 25 appearances in all competitions. Martial has been publicly criticised this season due to his overall contribution to play, lack of goals from open play and his lack of intensity as Ole Gunnar Solskjaer’s United have adapted a new aggressive pressing style of play. The arrival of Edison Cavani as a free agent last summer has proved to be an astute signing for Manchester United as the Uruguayan has impressed with his overall performances, attitude and leadership since arriving at the club. Cavani’s impressive performances have led to the majority of United fans suggesting the Uruguayan should lead the line instead of Anthony Martial for the foreseeable future.

Eyebrows were raised throughout Europe when Manchester United signed youngster Anthony Martial from Monaco for £36 million (via BBC Sport), rising to £58 million on the 1st of September 2015. The deal made the French under-21 international the world’s most expensive teenage footballer. The teenager caught European football scouts attention scoring fifteen goals in seventy appearances during his three seasons for Les Monegasques. His overall style of play is very similar to Arsenal and France legend Thierry Henry according to French football expert Philippe Auclair. The football expert also suggested Martial can be deployed on both wings and up front due to his excellent speed and technical ability in possession. The high transfer fee paid for a relatively unknown teenager caused the English tabloids and football writers to quickly write off the talented youngster brandishing him a waste of money. United manager hailed the signing of the young forward stating “he’s a marvellous player and he was an acquisition for Manchester United’s long term future”.

Martial quickly silenced the naysayers marking his debut against arch rivals Liverpool at Old Trafford scoring a phenomenal goal in a 3-1 win. He enjoyed an excellent relationship with legendary Dutch manager Louis van Gaal during their one year together at Manchester United. Martial has always praised the positive impact Van Gaal had during his debut season at the club and how much he helped with his integration to the English game. The £36 million plus add-ons looked like a good deal with the French man becoming a fan favourite and integral member of the first team within the first few months at the club. He marked his first full season as the club’s top scorer in all competitions with 17 goals winning the F.A Cup.

The FA Cup trophy was not enough to save Manchester United manager Louis van Gaal his job as he was sacked a few days later and replaced by Jose Mourinho. The board, fans and players were disappointed in Van Gaal’s strict regimented boring type of football which failed to deliver Champions League football which was the minimum requirement for the Dutch man to keep his job. Vice-executive chairman Ed Woodward decided that Jose Mourinho would be the right man to bring the glory days back to Old Trafford after two poor managerial stints since Sir Alex Ferguson retired. Martial was disappointed with Van Gaal’s sacking as he enjoyed a close relationship with him during their first year together at the club. The “Special One” brought in some much needed reinforcements including the talismanic Zlatan Ibrahimovic to lead his new look forward line. Mourinho opted to play with Ibrahimovic, Rooney and Rashford as his main attacking players which meant Martial appeared sporadically throughout the campaign. Martial made only 18 Premier League starts during the Portuguese manager’s first term only scoring four goals and providing six assists. This led to Mourinho publicly criticising the young forward for his lack of productivity and his overall attitude. Martial finished his second season at the club scoring 8 goals in 42 appearances in all competitions as he struggled for consistent game time under the unimpressed Mourinho. The Red Devils won the Europa League and EFL Cup in Mourinho’s first season in charge which was a significant improvement in contrast to previous managers.

The 2017/18 season proved to be another difficult season for the talented French man. Jose Mourinho added Premier League proven Romelu Lukaku from Everton for an initial £75 million as the Red Devils aimed to challenge for the Premier League. The big Belgian would be deployed centrally by Mourinho which meant Martial would be played out wide to accommodate the team which resulted in less productivity from the young French international. United boss Mourinho started to publicly criticise Martial for his performances and attitude saying (via The Standard): “He (Martial) is a boy with a different personality. The thing I can say is that I hope he will reach a level commensurate with his real potential”. Mourinho also suggested that Martial was suffering from personal problems which were affecting his ability to focus on his football. This added to their already frosty relationship thanks to Mourinho’s continuous sniping comments and over reliance on new star striker Lukaku. Martial finished his third season at the club scoring 11 goals in 45 appearances as the Red Devils failed to win a trophy but managed to finish runners up to Champions Manchester City. The French forward suffered a barren run for the club for the second half of the season after the arrival of Chilean striker Alexis Sanchez from Arsenal on a free transfer. His poor performances and lack of goals lead to speculation that United manager Mourinho would look to sell Martial in the summer transfer market.

Martial remained at the club despite the transfer speculation surrounding his future at the club under manager Jose Mourinho. He was used sparingly in the first few months of the season appearing off the bench three times. Martial finally got his opportunity when he scored his first league goal in the 3-2 comeback win over Newcastle. He continued his fine form, scoring five goals in his next four matches after the November International break, becoming one of seven players to have scored in five consecutive league games for Manchester United.

The Red Devils started the season well but the atmosphere at the club had turned toxic due to manager Jose Mourinho’s erratic behaviour since the pre-season tour in the summer. The decision was made to sack Mourinho following United’s 3-1 defeat to arch-rivals Liverpool at Anfield on the 19th of December. United brought in club legend Ole Gunnar Solskjaer as interim manager to replace the sacked Mourinho to try bring some much needed stability back to the club. Martial scored his 9th goal of the season in Solskjaer’s first game in charge of the club a 5-1 victory over Cardiff City. The French International committed his long term future to the club on the 31st of January 2019 signing a new five year contract with the Red Devils. Martial struggled with injuries during the second half of the season with a reoccurring hamstring injury keeping him side-lined for a number of months. Martial finished his fourth season at the club with 12 goals in 38 appearances in all competitions as he struggled with injury. However, the appointment of Ole Gunnar Solskjaer as first team manager proved instrumental in Martial signing a new long term contract at the club. The Norwegian manager has publicly stated that Martial will be an integral part of his first team moving forward and continuing to develop his striker partnership with Marcus Rashford.

United manager Ole Gunnar Solskjaer adapted a high pressing style of football with Marcus Rashford and Anthony Martial essential to this way of playing. The club decided to sell want-away striker Romelu Lukaku to Inter Milan which would make room for Martial to reclaim his favourite no.9 position after the departure of the big Belgian. The integration of academy superstar Mason Greenwood to the forward line by Solskjaer and his coaching staff proved to be a masterstroke. Martial enjoyed his best season for the Red Devils working closely with goal scoring legend Solskjaer to improve his overall game. His excellent form resulted in him finding the net 23 times in 48 appearances, his highest ever goal scoring return for a full season. The integration of Greenwood alongside the development of Marcus Rashford turned United’s front three into one of the most deadly strike forces in the Premier League. Greenwood, Rashford and Martial terrorised defences scoring 62 goals combined in all competitions as the Red Devils finished in 3rd place and reached three consecutive semi-finals. Manchester United fans were joyous at the thought of seeing three young attacking talents play attacking football under a club legend with the hope it could deliver the club long term success.

Martial’s game has improved significantly under the management of Solskjaer in particular, his finishing, which is evident from his statistics. However, during the first half of this season the same old questions have been raised again as the talented French man seems to play in fits and starts. His natural ability on the ball is there for all to see but it’s his consistent application that remains a conundrum for Manchester United fans. The unexpected title challenge at the half-way stage of the season has shown the over reliance of the exceptional Marcus Rashford who already has scored 15 goals in 32 appearances. If United are to keep pace at the top of the Premier League Martial needs to prove he is the man to lead the line for the Red Devils. He’s now in his sixth season at the club scoring 76 goals in 247 appearances in all competitions but now is the time Anthony Martial needs to prove he can be trusted to be the goal scorer the club needs. The talent is there but is the application?