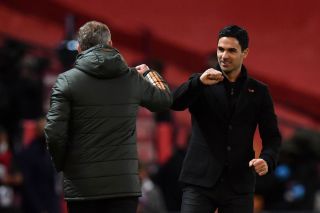 Manchester United are looking to get back to winning ways this weekend against Arsenal.

Arsenal have been in good form lately, scoring more goals than they’ve been conceding and steering away from the relegation zone closer to the European places.

We should fancy our chances because United are a better team — all over the pitch, and losing a game to Sheffield United during the week doesn’t change that.

It will give Arsenal extra belief going into the game but that will go out the window in the first 5 minutes if we start the game right.

“They have been impressive lately, turned it around,” Solskjaer said at his press conference, as per Manchester Evening News.

“Since the Chelsea game they have got really good results.

“Always great games against Arsenal. Some classics between the two sides.”

Arsenal this week announced the loan signing of Martin Odegaard. The Norwegian playmaker has been seen as one of football’s best young talents for years, and it’s amazing to think he’s still only 21-years-old.

The boss was asked about his fellow countryman joining Arsenal and he expects Odegaard to shine in the Premier League. Just hopefully not against United, right?

“Martin is a very talented young player,” Solskjaer added. “We know from the national team that he can cause anyone problems. Just hope he isn’t finding his form on Saturday! We wish him all the best.”