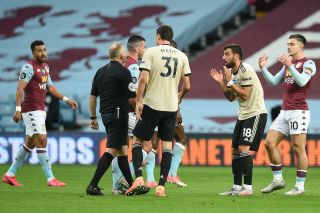 Bruno Fernandes has been the best buy at Manchester United since Robin van Persie in 2012.

Make no mistake about it. Bruno Fernandes’ arrival was a catalyst in Manchester United’s turnaround in form over the last year. We are a reckoned force in the Premier League again.

However, a report from Rob Dawson at ESPN has suggested Fernandes wasn’t actually our first choice.

Now, we knew about United being happy to let Fernandes go to Tottenham just months before changing their mind and signing him, but it’s news to us that Solskjaer had opted for Aston Villa star Jack Grealish over the Portuguese star.

The report claims Solskjaer actually instructed Ed Woodward to make an enquiry to Aston Villa about Grealish, but the two clubs were unable to agree terms so United went for Fernandes instead.

It’s mad how things work out — but I wouldn’t change Fernandes for Grealish. Solskjaer clearly wanted a leader on the pitch and he got the perfect signing in Fernandes last year.

I was sat thinking Donny van de Beek was our budget Grealish.

The England international has kicked on again this season, improving as a matured player to the point he’s added consistency to his game for Villa.

Let us know in the comments where you think Jack Grealish will end up next summer or do you think he will stay at his boyhood club Aston Villa?