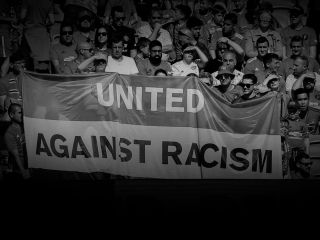 After the defeat at home against Sheffield United, many Manchester United fans, myself included may have been disappointed about the way things went during the game, rightly so. However, the news that two Manchester United players were racially abused after the game has disgusted me. It was horrific and unacceptable. Writing about this has never been easy and probably never will be.  Fake ‘Mea culpas’ are not enough anymore, action is needed.

While saying two words on social media as a message of support helps, we should do more as a football community; the club, the fans and football authorities. We as fans have the moral obligation to affect and change the atmosphere in social media. The platforms have become toxic and holding the authors accountable after what happened is the solution. Tech giants need to work on stricter community guidelines.

Personally, I thought that what happened in 2020 should have at least changed people for the better. Seeing footballers post and speak up about the problems of systemic racism clearly showed that action was needed immediately. Here we are a few months later, standing around the same point and once again racism takes us by surprise; it should not. The club has done a great work on launching several campaigns in the fight against it, but despite being clear, the message hasn’t reached everywhere.

Sometimes, we think of the players as some robots who have no life or feelings outside the football pitch. It may seem stupid when I put it this way, but the consideration we have for their lives is strange and at times we even overreact to what they do. In the fight against racism we should have known better. Not long ago, we had a case of misinterpretation by the English FA on Cavani’s words and the player was defended by the club. In terms of those standards, we as a fanbase know where the club stands.

However, this is a completely different case. Axel Tuanzebe and Anthony Martial were racially abused on social media with the club releasing a statement about the case. It showed that despite working on the subject, there are still people who cannot process the fact that hurting people is never okay. You want to criticize a player? This is in your right as a football fan and as a human being as well. Everyone is entitled to an opinion and freedom speech is a universal right, but offending someone based on skin colour and origin is a crime.

What is going to take for the big social media platforms to react against such acts? I mentioned community guidelines above, but this is not the only way of doing this. A regulatory reform should be considered on how social media users interact with one another. While it may be difficult to implement new algorithms on detecting bullying and racism due to the flaws present, it would still improve reporting and removing accounts and comments giving a warning. Another solution would be working with authorities on detecting and take legal actions upon this. While we see this happening once in a while when famous people are involved, this should be a standard. The damage these acts cause are massive and no one should be left alone in this war.

Getting back at the two players, they have worked their way up to play for Manchester United. Their respective stories show the immense effort they have put on to be where they are right now. While Martial has had to deal with the scrutiny of his price tag the moment he joined United, Tuanzebe has been here enough amount of time to be well known by United fans. His determination, talent and the recognition from those who truly matter mean a lot to him. Both will give the response in the football pitch, but this is not enough. Yesterday, Martial’s partner also received racist messages.

Anthony Martial’s wife has posted racist messages she has received on Instagram following the Sheffield United game. A simple search on the platform shows the accounts belonging to both users who sent the messages are still active.

Not only these people are not held accountable, but they also keep sending messages to the partners of the footballers. These acts only unveil the hidden, yet well known problems of the social media. At this point speaking is useless, unless the authorities oblige and force social media platforms to take legal actions, people will never receive a clear message: “The right to swing my fist ends where the other man’s nose begins.”