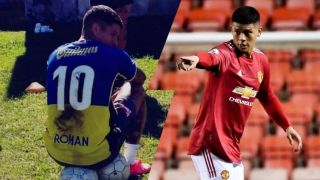 This deal feels like it has dragged on for weeks but the process will need to quicken up with the transfer deadline approaching.

Ole Gunnar Solskjaer is still trying to clear deadwood out of his squad. In the coming days we are expecting Marcos Rojo to leave and Jesse Lingard to join West Ham on loan.

Rojo, however, is linked with a permanent return to Argentina.

Laurie Whitwell from The Athletic understands Rojo is set to join Boca Juniors, with a three-year contract on the table.

The centre-back is expected to complete his move to Boca over the week brining an end to his seven-year career at United.

Marcos Rojo set to join Boca Juniors, with three-year contract on table. Final terms on #MUFC departure should be concluded over the weekend.

Brings to an end seven-year career at United.@TheAthleticUKhttps://t.co/ttYHYt8hnS

Although Rojo has been a bit-part player for the most part, he’s still made over 100 appearances for the club. He has not featured in the Premier League this season which tells you Solskjaer is eager to get rid of him.

I don’t think his presence will be lost around Carrington but we still wish him all the best with the next chapter of his career.