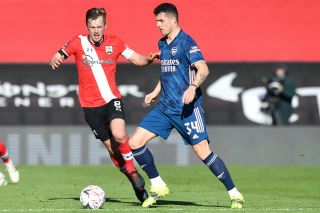 Xhaka has had to work hard to rebuild his reputation following a speculator demise last season. He lost the Arsenal captain’s armband after a bust-up with his own fans.

Yeah, it got ugly for Xhaka and for the most part Arsenal are probably lucky that games are being played behind closed doors this season. That AFTV grew sure know how to vent their anger!

But Xhaka has been a key figure in Mikel Arteta’s side this season, much to everyone’s surprise. He has been instrumental in Arsenal’s run of five wins from their last six Premier League matches.

Tomorrow the Arsenal midfield face an almighty task, with Ole Gunnar Solskjaer expected to start both Scott McTominay and Fred in the middle. He rested both players on Wednesday night and probably regrets that move in hindsight.

While Redknapp has been impressed by Xhaka of late, the Sky Sports pundit fears his old deficiencies could prove problematic for the Gunners when they take on United.

He told Sky Sports, as cited by the Metro: “Senior players have been a lot better. I was heavily critical of them when they were losing games.

“I still believe one or two of them turn it on when they want. There’s other times when you look at them and think they fancy this game.

‘Right now there are some senior players who are playing well. Xhaka is a player I’ve been really critical of, but his form has been great.

“Will he keep it going? I’m not convinced because you know he’s always capable of a red card or a rash challenge that’s going to cost his team.

“Especially in games where he plays against quick midfielders. His lac of pace really affects that midfield area.”

Xhaka has never struck me as a footballer with much quality.

He has always seemed a liability for Arsenal. A walking yellow card.

I’m hoping to be proved right tomorrow evening at the Emirates.