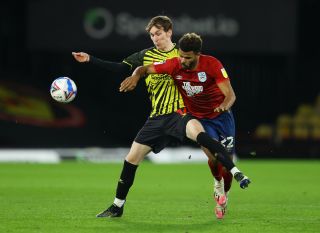 James Garner hasn’t enjoyed the first half of the season at Watford and it sounds like he is on his way back to Manchester United.

The central midfielder was given the chance to go on loan to Watford this season and earn some first team experience, but it hasn’t gone as planned in the Championship for Garner.

Still, Garner has 20 games under his belt from his time at Watford, so it wasn’t a complete waste of time. It just doesn’t help being put in and out of the team when these are the years he should be developing as a first teamer.

There’s a twist in the tale with QPR interested in a loan deal for Garner. They want him before the deadline, according to The Athletic.

Garner may return to #MUFC due to limited chances, QPR interest in loan. Want midfielder before deadline, Siliki distant, still interest in Grimes (but unlikely) others on PL fringes (Nakamba, Delph) potentials@TheAthleticUKhttps://t.co/N3jwuW8C37

Coming back to United may be a good option for a brief period, but Garner is running out of time if he wants to play football between now and the end of the season.

There’s no way he gets into our midfield now.