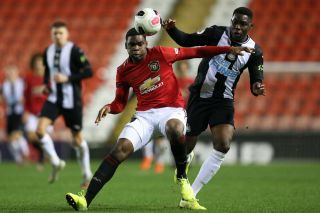 Manchester United’s Teden Mengi is set to make a decision on signing a new contract over the weekend.

Mengi, 18, is a product of United’s illustrious youth academy after joining the Red Devils’ under-18s squad in 2018.

After climbing his way through the club’s ranks, Mengi went on to make his senior debut last year during a Europa League tie against LASK.

However, despite being promoted to the club’s first-team ahead of the new 2020-21 season, Mengi has struggled to gain regular football.

The highly-rated centre-back has not featured in any senior matches so far this season and with his contract set to expire in 18-months time, there are growing concerns that the teenager may see his future elsewhere.

We reported earlier this month that the Red Devils have opened contract talks with their highly-rated youngster.

In a continued attempt to rack up game-time, any proposed loan-moves depends heavily on whether or not the 19-year-old signs on the dotted line.

We understand that the situation remains largely the same, with Mengi expected to make a decision surrounding his future within the next 24 – 48 hours.

It has been revealed to us from a close source that Mengi is likely to commit his long-term future to the Red Devils, but ultimately, the decision is his to make, which is not expected until sometime over the weekend.