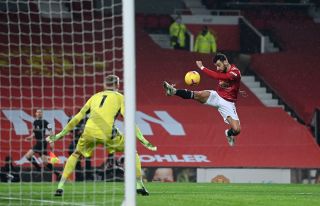 I reckon there will be a penalty given at the Emirates on Saturday.

With that, I obviously hope that one goes in Manchester United’s favour because Ole Gunnar Solskjaer’s Reds need to immediately bounce back from Wednesday’s 2-1 defeat against Sheffield United if they are to be serious contenders for the Premier League title this season.

Right now, it there’s a feeling of surprise that United are in this position but realistically it’s a brilliant opportunity for this squad to announce itself. Man City are very good and it seems like they’ve fixed their problem in front of goal — without Kevin de Bruyne being fit and Sergio Aguero struck with a dose of coronavirus — but beating Arsenal this weekend would be a statement.

I’m not overestimating what Arsenal are… Mikel Arteta has his work cut out for him but the club should take a page from United’s book in remaining patient with the manager. His ideas take implementing and he’s not got much quality in his squad. The addition of Martin Odegaard on loan is exciting from a Premier League perspective, so it will be interesting to see if he can lift Arsenal’s season like Bruno Fernandes did at United last year.

This is why I want United coming into the game with fire in their bellies. We were awful when Arsenal beat us at Old Trafford earlier in the season, so this is a chance to set the record straight, to show far how we’ve come while Arsenal have worsened. Make sure to get all the betting bonuses if you do fancy a flutter for this big game — it’s a tie never short of drama.

There’s still an unreal buzz that comes with beating Arsenal. Long gone are the Roy Keane and Patrick Vieira days, but Arteta doesn’t want his stars playing with much discipline nowadays. That could make this a tasty encounter again.

The Gunners won five and drawn one of their last six Premier League matches and face a United side whose 13-match unbeaten league run came to a surprise end on Wednesday night.

They’ve turned things around since their season looked a mess heading into the festive period, when they spent Christmas Day sitting 15th in the Premier League, with a relegation battle on the cards rather than a fight for Top Four.

This shows how quickly things change because when you fast forward little more than a month and Arsenal have moved to within touching distance of the Champions League places.

Only City have accumulated more points than Arsenal during the same period during which Arteta’s side scored 14 and conceded just two goals.

If you fancy a bet this weekend, I’ll be throwing a tenner on United scoring Over 0.5 penalties.