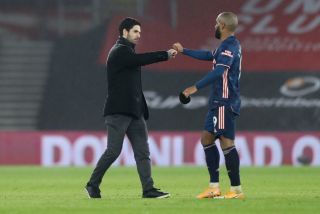 Manchester United travel to the Emirates on Saturday in the Premier League.

It’s a brilliant chance to immediately bounce back from Wednesday’s shock defeat against Sheffield United at Old Trafford because Arsenal are nothing special and are stuck in a deeper transitional hole than ourselves.

The fact we were so bad losing to them at Old Trafford already this season should spur on our lads to get the job done. Do they seriously want to be dismissed as another team — like Spurs — who spent a honeymoon at the top of the Premier League? No, Ole Gunnar Solskjaer wants his players recognised as the best and they must respond this weekend.

Arsenal youngster Bukayo Saka took the headlines on that evening with a goal and assist. And he’s a player I suspect Solskjaer will be keep an eye out for when the game kicks off, making sure that United’s defence is ready to deal with any goalscoring threats.

That in many ways is probably Solskjaer’s most difficult task, but he also needs Anthony Martial to start finding the back of the net. The Frenchman has been poor for too long this season, and Mason Greenwood should really be knocking the manager’s door down.

At home, Arsenal have kept three clean sheets in a row — as many as they had managed in their previous 19 games at the Emirates — so we are definitely up against an in-form side. Make sure to consider all of this data when placing a bet on the match this weekend, or even check out wetttippsheute.net for betting and tipster advice.

That’s why we can’t have a repeat of Wednesday night because complacency destroys momentum. Manchester United had been doing so well but to throw it away now would be incredibly disappointing. The nightmares from being knocked out of the Champions League will come again.

I’m still hopeful that come to end of the season we will have something else to bite us. Something exciting. This weekend I think United will win. 2-0

Pierre-Emerick Aubameyang has missed Arsenal’s last two matches due to his mother being unwell, but Arteta will hope that his captain will return for this game. The 31-year-old’s situation is very much up in the air at the moment which makes it difficult to predict.

Thomas Partey and Emile Smith Rowe both came off with minor muscle complaints against Southampton and will be assessed ahead of kick-off.

Arsenal’s loan signing Martin Odegaard is available but this could come too soon for the Norwegian playmaker after just joining up with his new teammates this week.

As for United, we are waiting on an update for Eric Bailly. Other than that everything seems fine.

Anthony Martial has come under pressure and Edinson Cavani could lead the line against the Gunners.

You can watch the match live on Sky Sports Premier League and Main Event from 5pm.

You can also stream the match live via NOW TV or via the Sky Go app on a variety of devices.