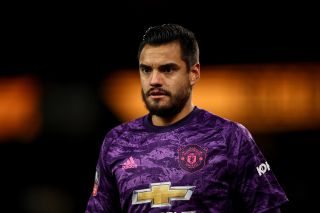 Manchester United goalkeeper Sergio Romero is a dead cert to become one of the club’s next departures.

Romero, 33, joined United in 2015 on a free transfer after making the switch from Italian side in Sampdoria.

Despite arriving in Manchester under the label of ‘back-up keeper’, Romero’s six-years with the club has seen him become a popular figure among fans.

Whenever called up, the Argentinian has performed exceptionally well and for large periods was widely regarded as the best number-twos in world football.

However, Romero’s time at Old Trafford turned sour after he was snubbed by Ole Gunnar Solskjaer for last season’s FA Cup and Europa League semi-finals; two competitions he had previously featured in.

Romero’s snub lead to his wife unleashing a barrage of criticism on social media aimed at her husband’s employers and from then on, it became clear the 33-year-old’s time at United was up.

With his contract set to expire in less than six-months, the South American shot-stopper is now looking at his options and deciding on where he’d like to ply his trade next.

According to a recent report from Marca, Romero has emerged as a summer target for Graham Potter’s Brighton and Hove Albion.

Following the recent departure of Seagull’s keeper Matthew Ryan to Arsenal, Marca claim Brighton could turn their attentions to the out-of-favour Romero as an ideal replacement.

It has also reported that Romero’s chances of returning to his native Argentina are ‘low’ with the goalkeeper preferring to stay in England’s top-flight.