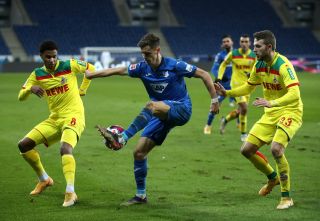 According to The Sun, Manchester United are watching Christoph Buamgartner ahead of the summer transfer window.

The 21-year-old Hoffenheim midfielder has shown in the Bundesliga this season with a move expected for him at the end of the season, but he is not familiar to a lot of United fans.

Central midfield may not be a priority for the Red Devils right now, but that could change if Paul Pogba and Nemanja Matic were to leave, so the club are preparing as though that could be the case when the Premier League campaign ends.

Pogba has been in impressive form of late but Matic has hardly played this season — especially in comparison to other campaigns — but Fred and Scott McTominay have stood up.

So if you’re new to Buamgartner, here are 5 snippets of information about the midfielder:

Apparently, the midfielder’s contract expires in 2023 but United are expected to make a big for the player this summer. I would be surprised if they didn’t up their price for the Austrian in the summer because that sounds very cheap for a player attracting interest from United.

Baumgartner has been compared to Michael Ballack and Kai Havertz in the past.

“(He) is an extremely talented player with strong technical skills and a good sense for space in attack,” said Hoffenheim sporting director Alexander Rosen, as per the official Bundesliga website.

“As a result, he always develops solutions in tight game situations and is also dangerous around goal.”

Read more: Why Anthony Martial’s disallowed goal for Manchester United against Sheffield United was not reviewed by VAR