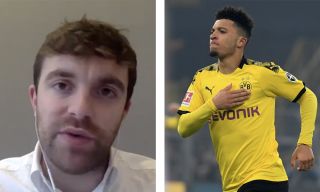 Sancho, 20, was hotly tipped to become a United player during last summer’s transfer window, however, after being valued at over £100m, the Red Devils found it increasingly more difficult to reach an agreement with Borussia Dortmund.

After enjoying a hugely impressive breakthrough campaign which saw the young Englishman directly involved in a whopping 40 goals from just 44 appearances, there were suggestions Sancho could be the next star to take United’s famous number-seven shirt.

However, as fans know now, a move in the summer failed to happen, with United forced to gift Edinson Cavani the famous jersey and Sancho left to continuing playing in the Bundesliga.

As the January window now draws to a close, all attentions will soon be turning to the summer window and the speculation surrounding Sancho has not seemed to die down.

Journalist Romano, who spoke exclusively with CaughtOffside, provided an update on the ongoing saga, suggesting United are still keen on the 20-year-old but may now face competition from other top European clubs.

“For sure Manchester United will be in the race,” Romano explained. “We will see whether he will be the priority. If they have to sign a winger they will go with Sancho because he is the main target, and they have an agreement with the player.

“Next summer the situation will be different because there’ll be a race with other clubs. Last summer it was Manchester United and Sancho and no more. Now we’ll see if other clubs join the race. At the moment I don’t have any names ready to pay this amount – €120m – but we are in January…we’ll see in March when clubs start to move for big targets.

“I’m sure Manchester United will be in the race because if they wanted to sign another winger – they had the chance to sign Dembele for €80m – but they prepared to save the money and go next summer for a winger.”

“For sure, Manchester United will be in the race.”@FabrizioRomano explains why @ManUtd should be among the suitors for Jadon Sancho again next summer 🔴 pic.twitter.com/2QZpzTAm9u