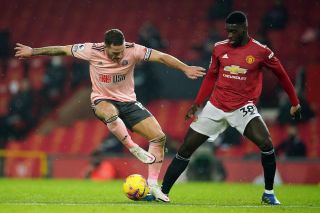 To see anyone — not just a Manchester United player — racially abused is horrible.

The young centre-back didn’t perform well last night but wasn’t to blame for the 2-1 defeat. It just shows how childish the abusers are to vent anger on social media. It’s as though they feel through anonymity they can say what they like but I hope they’re caught by the authorities and punished.

It was a lacklustre performance from the whole team but the reaction from some morons was typically toxic. On Instagram, the comment section below Tuanzebe’s post was flooded with monkey emojis and other racist symbols.

Look at the abuse Tuanzebe is getting on his Instagram page after tonight’s result, Racism in football has got to stop man it’s disgraceful pic.twitter.com/TqmnIjbhSY

2021 and there is still racism on football, Alex Tuanzebe will show who is boss #BLM pic.twitter.com/l6It9U3tlv

We can only reassure the defender that he has has our support and these idiots are not fans. They are attention seekers who wouldn’t dare post such hatred under their genuine identity.

Some idiots abusing Tuanzebe on Instagram. Shameful stuff and obviously not United fans.