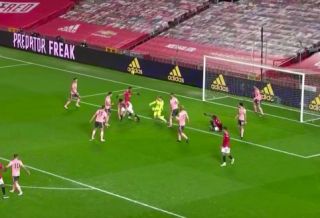 Anthony Martial’s disallowed Manchester United equaliser against Sheffield United could not be reviewed by VAR because the referee had already stopped play, according to former Premier League official Peter Walton.

United felt aggrieved on the half-hour mark when Martial’s finish into an unguarded net was chalked off due to Harry Maguire impeding Blades’ goalkeeper Aaron Ramsdale in the build-up.

Maguire made minimal contact with Ramsdale as both competed for the ball, and the ball dropped kindly for Martial who finished tidily.

But referee Peter Bankes had already blown his whistle before the ball had crossed the line meaning Martial’s goal could not be overturned.

Walton explained at half-time of United’s 2-1 defeat the ruling surrounding the incident.

“I don’t think the impact on De Gea was enough there for it to be a foul, however, that’s an opinion. In the second one, when Maguire goes across Ramsdale, he clearly impedes him with his arm going across him.

“However, the referee has blown his whistle before the ball has gone in the net, so VAR couldn’t look at it because the VAR would then be adjudicating on a foul and not a goal.

“Well, we’ve heard many times about the referees and the assistants just delaying their flags and whistles, so the VAR can look at it if the ball ends in the net, and I do think Peter Bankes was a little bit too sharp on his whistle there.”

What made things even more frustrating for United supporters was the lack of consistency in decision making by Bankes.