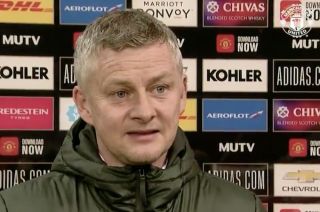 Ole Gunnar Solskjaer has named a much changed United line-up to the one which faced-off against Liverpool last weekend in the FA Cup.

Speaking ahead of the game, Solskjaer has explained the reasons why he has opted to go with the starting line-up he has.

🗣 Ole on tonight’s 6️⃣ changes, including a start for Axel Tuanzebe 💪