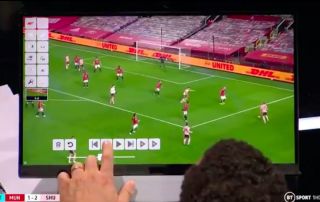 Rio Ferdinand was shocked by the lack of desire from Manchester United defenders in preventing the opportunity that led to Sheffield United’s winning goal at Old Trafford.

United were defeated 2-1 by Chris Wilder’s bottom placed side as they missed the opportunity to return to the summit of the Premier League.

Oliver Burke scored the winner in the 74th minute to secure only the second league victory of the season for the Blades.

Despite Burke benefitting from a wicked deflection from Axel Tuanzebe, United were guilty of failing to clear their lines on several occasions in the build-up.

United great Ferdinand broke down step-by-step the defensive chaos that ensued before the ball eventually found the back of the net.

He believes David de Gea should have done more with his attempt at a clearance and was disappointed by the lack of intensity in closing down by Martial and Nemanja Matic.

When the ball eventually found Burke in the box, Alex Telles was slow to make an attempt to block his shot and Ferdinand questioned the Brazilian left-back for his role in the goal.

Ferdinand added that he could not understand the lack of urgency from a side that had the opportunity to return to the top of the league with victory this evening.

Listen to Rio Ferdinand breaking down the goal below. Footage courtesy of BT Sport.

"Martial please sprint to him, PLEASE!"

"Mr. Matic, please get out to the ball!"@rioferdy5 looks into the sequence that summed up a disappointing night for Man Utd 😤 pic.twitter.com/y9RuZJ2EZ0