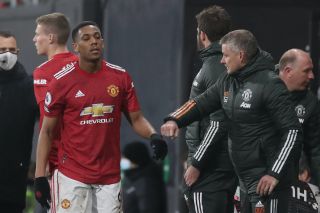 The Manchester Evening News shares the matchday squad first hours before kick-off after sending photographers to the Lowry Hotel where the Manchester United players and staff meet before games.

Eric Bailly looks set to miss Manchester United’s clash with Sheffield United having not been pictured arriving at the team hotel with the rest of the squad ahead of Wednesday’s league match-up.

The Ivorian missed the win over Liverpool at Old Trafford in the FA Cup but was expected to return tonight after putting in a run of impressive performances alongside Harry Maguire.

“Eric’s fine, he’ll be ready for the midweek, we don’t want to take risks at all,” Solskjaer said after United’s win over Liverpool, as per MEN, however he was not seen arrive at the team hotel like other players and Ole Gunnar Solskjaer’s staff.

In other news, it looks like Amad Diallo will be made wait for his first-team debut, with the 18-year-old yet to feature in a provisional squad since completing his switch from Atalanta this month.

Once he’s up to speed with English football, Diallo is expected to occupy the right flank for United, an area that has gone ignored in the team since Wilfried Zaha’s sorry arrival.

Mason Greenwood scored when he got minutes against the Scousers and I would be hoping to see him in action again tonight. Edinson Cavani should lead the line as he’s long shown he’s the best player we have for that role.

Solskjaer is expected to make a few changes to the side which defeated Liverpool on Sunday afternoon.