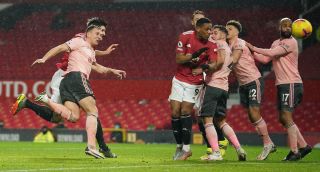 Impeded or not, far too weak for Kean Bryan’s opener. Could have cleared further to prevent Burke’s winner. 4

Positive outlet for United at times in the first-half but attacking influence faded in second-half . 5

Caught under the ball in the six yard-box for Bryan’s opener and carded for a rash challenge. Could do little about wicked deflection for Burke’s winner but culpable for the defensive shambles that preceded it. 3

Struggled to deal with Billy Sharp and David McGoldrick and had to command the situation for Burke’s goal as United failed to clear on countless occasions. Superb header from Telles’ corner was in vain. 4

Signed for his attacking proficiency but failed to provide same outlet as Luke Shaw. Good corner for Maguire’s equaliser. 4

Could not assert midfield dominance or expedite attacks. United lacked the effervescence of Fred in the middle. 4

Pogba started fairly brightly but could find no rhythm linking up with his teammates. The axis with Matic wasn’t working and it was bizarre that it wasn’t broke up sooner.  5

Talismanic for most of the campaign but offered no moments of quality against the league’s worst team despite his endeavour. 4

Quiet throughout and could not build on excellent showing against Liverpool. His form is temperamental right now. 3

Most potent of United’s front three in first hour and unfortunate to be hooked for Cavani instead of Martial. 6

Unfortunate to have equaliser disallowed but his performance far from justified his selection and he gave the ball away in build up to the Blades winner. His inclusion ahead of Cavani must be questioned. 3

Should have been brought on at half-time. Worked tirelessly again but teammates couldn’t provide a decisive chance. 5

Not afforded the time to make an impact. N/A

Importance was best highlighted in his absence. N/A