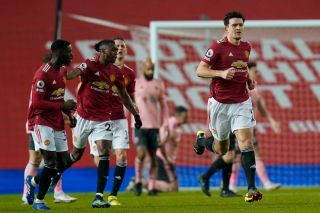 Ole Gunnar Solskjaer’s side missed the chance to return to the top of the Premier League table after losing 2-1 to Chris Wilder’s bottom placed side at Old Trafford.

Oliver Burke’s scored the winner in the 74th minute after a wicked deflection off Axel Tuanzebe, but United had countless opportunities to clear and the space afforded to Blades attackers was alarming.

In November, the Reds conceded a goal that almost had to be seen to be believed with no player within 20 yards of Demba Ba as the former Chelsea striker ran from his own-half to score from the United set-piece.

Incidentally, Harry Maguire and Tuanzebe were the centre backs that started in each game and both were at fault this evening.

Maguire couldn’t command the situation, Tuanzebe failed to clear adequately and there was no intensity to close down the following shot.

Plenty of supporters on social media have understandably compared the two moments of defensive ineptitude.

That second goal is one of the worst I’ve seen us concede! Only Istanbul away beats it. #mufc

That was an absolute disgrace. Fair play to Sheffield Utd, great value for the win. #MUFC poor and slow, all over the pitch. Individual errors and complete lack of impetus throughout. As bad as, if not worse than, Istanbul away.

10v11. Martial has been MIA. Defending on the 2nd goal we conceded was worst than the goal against Istanbul. Ole said after the cup game we need to show our character during this game. Worst performance of the season by a country mile #mufc #MUNSHU

What an awful goal to concede! They played rings around us in our own penalty box!

One of the worst goals I've seen us concede since Istanbul.

Now we need to score 2… Come On Lads! #MUNSHU #MUFC

Greenwood was our most promising player but got taken off. 2nd goal conceded was worse than the one in Istanbul. Deserved to lose. #MUFC