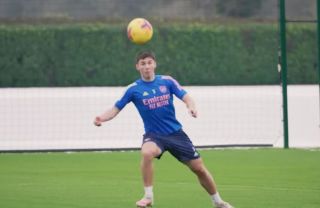 Arsenal left-back Kieran Tierney appears to have handed Arsenal a major boost ahead of Saturday’s Premier League clash against Manchester United after being spotted training on Wednesday.

The former Celtic defender has struggled to maintain his fitness since joining the Premier League club, but when fit he is a force to be reckoned with…

Tierney was missing last night as the Gunners recorded their fifth win from their last six matches to move to within four points of a Champions League place. That’s a significant improvement considering Mikel Arteta had them closer to the relegation zone not very long ago.

It’s a big test for Arsenal against an in-form United side out for revenge.

Arteta could benefit massively from having Tierney available for the match.

Speaking after Arsenal’s win at St. Mary’s last night, Arteta said (via Metro): “From Saturday, just to make it clear, we had five players who were not available to play. We made seven changes and five of them were because they were not ready to play the game. KT was one of them.

“I don’t know (if he can play against United). He wasn’t available against Southampton in the FA Cup; he was injured. He’s still injured today. Let’s see how he progresses for the game against Man United.”

The Scotland international appears to be in with a chance of playing after he was spotted in a video posted on Arsenal’s YouTube account, which also shows Arsenal new loan signing Martin Odegaard settling in with his teammates.