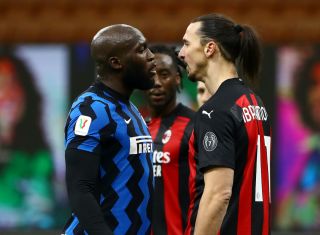 Zlatan Ibrahimovic got into a spat with Romelu Lukaku and was later sent off.

The Swede got the eventful evening going with a strike in the 31st-minute to put the Rossoneri ahead in the derby.

But just before half-time Ibrahimovic clashed with Lukaku, after the two were teammates under Jose Mourinho at Manchester United.

At one point their heads were pressed against each other, which resulted in a booking for the pair — but Ibrahimovic didn’t recieve his marching orders until he fouled Aleksandar Kolarov just before the hour mark.

Ibrahimovic and Lukaku really clashed towards the tunnel at half-time. The Belgian screamed something foul-mouthed about the AC Milan forward and his wife.

Pictures courtesy of Serie A:

This fight between Zlatan and Lukaku went too far I think 💀 pic.twitter.com/Gjgbv1JEkf

Lukaku can be heard repeatedly saying: “You want to speak about my mother?”, which in the grand scheme of things isn’t very nice. Sport Witness editor Annie Eaves makes a very valid point below following the altercation:

Tonight’s mess with Lukaku and Zlatan, with repeated mum, wife, female references… including insults which are specifically female related, is another great example of how sexist language in football is “OK”

If this was racist language, the outcry would be huge.

It’s hard to know what Ibrahimovic said to truly rile his former United team-mate but I don’t think the pair will be expecting to exchange Christmas gifts this year.

There’s no arguing which one of the strikers Mourinho prefers…