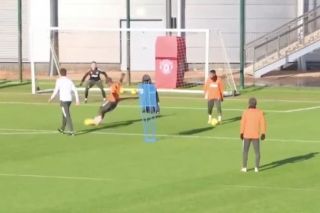 The first glimpse of new signing Amad Diallo after the winger completed his transfer from Atalanta.

Amad Diallo did not feature regularly for Atalanta (only 5 senior appearances), despite agreeing to sign for United on deadline day in the summer but having to wait until January to move due to a pending work permit.

United fans hoped he would’ve played more often for Atalanta this season, but he had limited time on the pitch, so we can’t back up our excitement with statistics as would be the case with most other signings.

He showcased his talent during a recent training session, playing a one-two with a teammate around Michael Carrick, before curling the ball into the net.

If this side is lacking one thing at the moment it’s a goalscoring threat from the right flank. There were reports today on Borussia Dortmund potentially cashing in on Jadon Sancho after big losses from the global pandemic, but United might be viewing that position with a different tone at the end of the season.

Especially when it seems like the Sancho boat has sailed.

Meanwhile, I wouldn’t be surprised if Diallo’s debut came this week.

One response to “Video: Amad Diallo shows he can finish in Man Utd training”