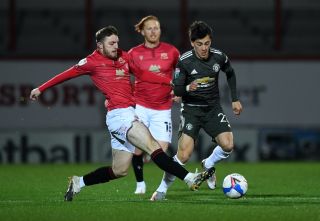 Facundo Pellistri is looking increasingly likely to be loaned out this month, with clubs from both Italy and Spain showing strong interest.

The 19-year-old joined Manchester United from Uruguayan side Penarol in the summer but has yet to make his first-team debut under Ole Gunnar Solskjaer, who is warming to the idea of loaning him out, as per The Athletic.

The Uruguayan holds a Spanish passport and his agent recently stated that Spain would be an obvious destination of choice for the winger.

However, Italian club Monza have shown interest in Pellistri and are reportedly one of the sides most active in pursuing him.

According to Diario de Almeria, Spain is the most likely destination but Monza’s interest should not be underestimated. ‘Uruguayan footballers and the English market are well controlled by Almeria. Examples are Darwin Nunez, Olivera, Appiah, Ramazani, Carvalho,’ the outlet says.

‘[Almeria’s] objective now is a footballer who combines both conditions: Facundo Pellistri.

‘Almeria are close to obtaining the player’s services, whose representation agency is the same as that of Darwin Nunez.

‘Their relationship is very good… and now favours the arrival of this right-handed winger, who plays for Manchester United.

‘If Pellistri gets within range, the club will go for him, which would accelerate the departure or transfer of other players.’

Obviously the arrival of Amad Diallo has made Solskjaer think twice about Pellistri being around the squad, especially if it lessens his chances of game time and United probably feel he would be better playing elsewhere than stuck with the U23s.

First team experience at this level is key and Pellistri may be better sent somewhere like Spain or Italy, instead of the Championship where it’s bound to be more physical.

Send the kid somewhere he can flourish and build.