Manchester United are set to host Sheffield United in the Premier League on Wednesday night.

Looking to retain their lead at the top of the Premier League table, the Red Devils will be hopeful they can rise to the challenge of beating Chris Wilder’s struggling Blades.

Sheffield United have been in dire form and whilst their results may not necessarily reflect their on-field performances, there is no getting away from their hideous league position.

Ahead of the important domestic tie, we have looked at how we expect Ole Gunnar Solskjaer to line his Red Devils up.

After being rested for his side’s FA Cup tie last weekend, De Gea will undoubtedly be recalled to the starting line-up on Wednesday.

Had a decent game on Sunday and is easily the club’s first-choice right-back, assuming the English defender doesn’t pick up any last minute injuries, he’ll be starting against Sheffield United.

Enjoyed a very good game against Liverpool and with Bailly being carefully managed to ensure he remains fit, I will stick my neck out on the line and say Lindelof gets the nod on Wednesday over his Ivorian team-mate.

Never misses a game. United’s captain will be tasked with competing against the Blades’ notoriously physical side.

One of the club’s best players at the moment, Shaw is enjoying arguably his best patch of form, ever.

For this reason alone, I cannot see Solskjaer benching him. I expect Shaw to start again on Wednesday.

I expect the Serbian midfielder to be recalled to the side’s starting line-up due to his physicality and height.

Similarly to Shaw, Pogba is also enjoying a fine patch of form.

It’s going to take something special to nudge the Frenchman out of his side’s starting line-up.

Sunday’s match winning hero, absolutely no way does Fernandes not start on Wednesday.

Was in brilliant form against Liverpool last weekend, scored our equaliser and set Marcus Rashford up shortly afterwards.

Still without an out and out right-sided winger, Greenwood is our best option on the right flank and will be used again on Wednesday.

Tough pick between Cavani and Anthony Martial but given how well the South American linked-up with Rashford and Greenwood on the weekend, I wouldn’t be surprised to see the 33-year-old keep his place.

Looked really sharp against a tricky Liverpool side. Rashford will be hoping to continue his impressive form when his side host the Blades at Old Trafford on Wednesday. 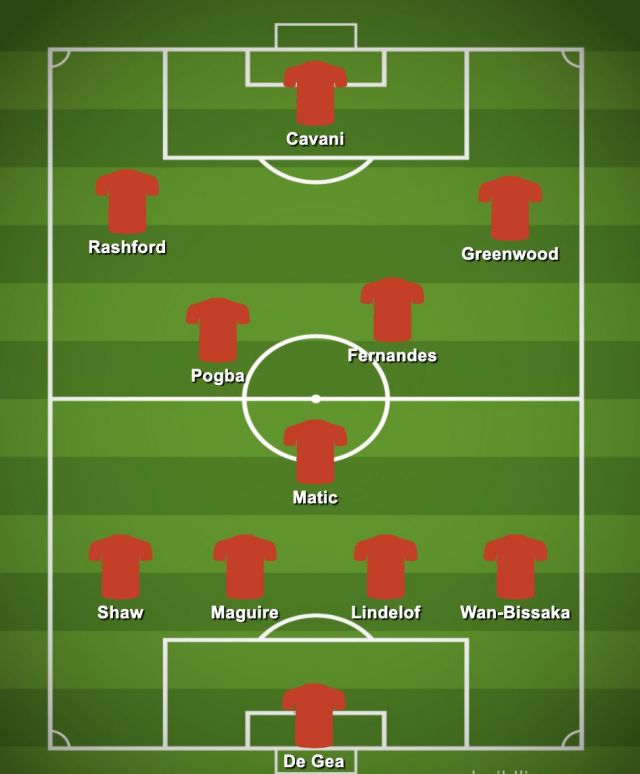