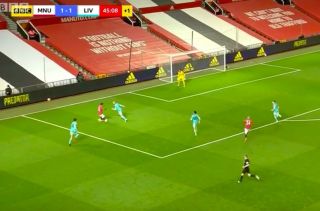 Marcus Rashford’s involvement in Manchester United’s equaliser against Liverpool in the FA Cup fourth round was exquisite.

The England international has frustrated at times but found Mason Greenwood with a glorious long through ball before the youngster finished past Alisson to level terms at Old Trafford.

Rashford is constantly targeting Trent Alexander-Arnold on the left-flank after being utilised through the middle in last weekend’s goalless draw at Anfield.

He got beyond his Three Lions teammate on the stroke of half-time and showed great pace to beat Rhys Williams to Edinson Cavani’s lofted pass before gliding past auxiliary centre back Fabinho.

Rashford picked out Greenwood on the edge of the box who laid off for Paul Pogba who fired just wide of the post.