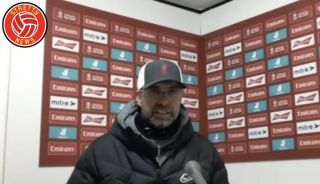 Liverpool manager Jurgen Klopp has shown glimpses of bitterness towards the decision to award rivals Manchester United with a game-winning free-kick during Sunday’s FA Cup tie.

After falling behind to an early Mo Salah opener, United rallied to come back to lead 2-1 before Salah doubled his tally to make the game 2-2 going into the game’s final 20-minutes.

However, in true United fashion, the game is not over until it’s over (and if you’re Brighton, it may not even be over then!)

Anyway – The Red Devils were awarded with a free-kick after defender Fabinho went straight through the back of striker Edinson Cavani.

Speaking after the close encounter, Klopp has had his say on the decision.

Read more: Ole Gunnar Solskjaer reveals what Bruno Fernandes did to prepare him for Manchester United winner vs Liverpool