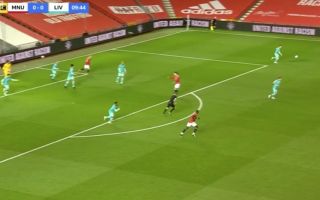 We’ve been the better side from the off and appear to have real belief about us in these early stages.

Donny van de Beek and Paul Pogba and finding the right paces and there’s nobody watching thinking the game will lack goals.

Mason Greenwood had a good opportunity to score after sprinting down the right flank, although he should have looked up first in attempt to find either Donny van de Beek or Marcus Rashford, who were both lurking in and around Liverpool’s penalty area.

Instead, Greenwood goes for goal himself only for Allison to make a routine save.

Pictures via BBC One

Edinson Cavani tears into Greenwood after the ball goes out of play.

Showing his experience and willingness to hurt the opposition, Cavani clearly shares the view that Greenwood should have squared the ball rather than going for glory himself.