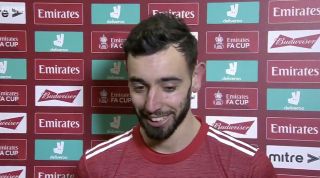 United came into Sunday’s exciting clash in great form and would have undoubtedly been fancying their chances against a sub-par Liverpool.

However, the game which was in stark contrast to last weekend’s domestic tie saw an empty Old Trafford play host to a five goal thriller.

After falling behind to an early Mo Salah goal, United later went on to fight back after goals from Mason Greenwood and Marcus Rashford fired the Reds into a 2-1 lead.

However, after Salah netted a brace with 20-minutes to go, all the pressure was on second-half substitute Bruno Fernandes to salvage the game and the Portuguese superstar did not disappoint.

After stepping up to take a free-kick dangerously close to the edge of Liverpool’s box, the 26-year-old midfielder guided the pin-point dead-ball beyond keeper Alisson.

Speaking after the game Fernandes took the time to dedicate Sunday’s impressive win to the United faithful.

Bruno Fernandes is well aware of how Man Utd fans will be feeling right now!